We see the elements in place for strong performance across Asian interest rates, currencies and credit in 2019.

Following the significant repricing of markets that we saw in 2018, we are now seeing the elements in place for strong performance across Asian interest rates, currencies and credit in 2019.

Since the U.S. Federal Reserve raised rates four times in 2018 and stayed the course on balance sheet reduction, we expect no further Fed rate hikes this year. This would give Asia's policymakers an opportunity to also slow their pace of rate hikes, given that inflation remains low across the region.

Our outlook for Asian currencies is also positive. With U.S. growth still positive but decelerating and the Fed appearing to be on hold, we expect Asia's currencies to outperform versus the dollar. The significant drop in oil prices late in 2018 also helped shore up oil-importing countries across Asia, providing a boost to foreign exchange reserves, current accounts and fiscal balances.

Finally, Asia high yield spreads offer attractive values for the long-term investor. With 12-month trailing default rates at 1.55% and spreads hovering around 6% at the end of 2018, the market has priced in substantially higher expected future defaults than the current run rate. We believe the major risks to the region—including a further slowdown in global growth, any escalation in trade shocks or further outflows stemming from policy normalization in the U.S.—are priced in at these levels. As such, the relatively attractive yields in Asia offer a strong base for positive returns.

Looking at the global macro picture, we see the potential for the reacceleration of growth in China, in contrast to persistent economic weakness in Europe and decelerating growth in the U.S. The weak data from Europe is coming from both the strong countries such as Germany, as well as the weaker economies such as Italy. This is worrisome, especially in light of the political uncertainty. On the U.S. front, the American economy will likely decelerate as fiscal stimulus fades. Finally, we have seen steady doses of fiscal stimulus out of China, which should provide a soft landing for the economy.

Since November of last year, we have seen consistent signs that China is moving into a more fiscally proactive policy stance. We see infrastructure spending has rebounded, for example, and more projects being approved. Local government bond issuance has also increased. With China becoming increasingly fiscally proactive and stimulative efforts from the U.S. lacking, we expect there would be a reversion of the “decoupling” that we saw last year. The implication for us is that we continue to hold a constructive view on Asian economies and Asian currencies this year.

The key takeaway is that slowing growth in the U.S. and a mild reacceleration in China bode well for emerging market assets. A key difference between the two economies is that the stimulus in China will be more evenly split between infrastructure growth and the service sector as the country continues to stimulate through tax cuts, which should put more money into the service economies. This bodes particularly well for Asia as it will benefit from a rebound in consumer discretionary spending such as travel. While resource-rich Latin American countries such as Peru, Chile and Brazil will no doubt benefit, the boost might not be on the scale of what we saw in 2009 or 2015.

As we look ahead, we find U.S. dollar-denominated debt of corporations in Asia appealing because the securities can be grounded in intrinsic value. For investors with a long-term investment horizon of greater than three years, the total return potential for Asia credit offers a compelling opportunity at current levels.

In January, we saw a strong rebound in the high-yield segment of U.S. dollar-denominated Asia bonds, with the J.P. Morgan Asia Credit High Yield Index returning 3.4% in a single month. This fast and furious rally will almost certainly slow and experience some volatility over the year. But the key point is this: even without price appreciation, Asia dollar high yield offers attractive total return.

From a sector perspective, we also see opportunities among Chinese property developers. While the overall Chinese real estate market is experiencing a slowdown, the stronger ones are gaining market share over the weaker ones. So we have been adding to top 20 real estate developers that have prudent balance sheets, have prefunded this year's maturities and are gaining market share from weaker companies.

Our outlook for emerging markets in general is very constructive, particularly within Asia fixed income. Across interest rates, credit and currencies, the macro environment could provide a tailwind for Asia bonds. Building portfolios from the bottom-up, we will continue to look for the most compelling opportunities among the world's fastest-growing economies. 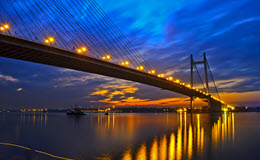